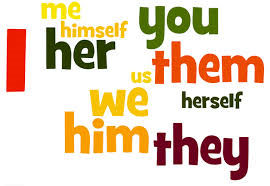 Do you ever have a problem choosing pronouns correctly? Do you get confused about I or me or myself? Relax! You’re in good company!

There are several types of pronouns, but most of us are concerned with nominative, objective, possessive, and reflexive (or compound).

Nominative pronouns can only be used as the subject of a verb or a sentence.

Objective pronouns can only be used as the object of a verb, sentence, or preposition.

Reflexive pronouns can only be used to direct action back to the subject (think mirror image) or as intensifiers.

Choosing pronouns correctly sometimes means just focusing on them one at a time (and ignoring anyone else in the sentence). Once you’ve chosen the correct pronoun, keep the form when you add back the other people.

Here’s how to do it!

Nominative pronouns are the subject of the verb.

So, when you add back “her mother,” the complete sentence is “She and her mother went to the movies.”

NOTE: You could start a sentence with “her,” but the usage would be different. In that case, “her” wouldn’t be a personal pronoun; it would be used as a possessive pronoun.

Her mother and her father went to the movies.

She’s older than me / I. While most of us say, “She’s older than me,” it’s wrong. What’s missing is the verb at the end of the sentence, and even if we neither write nor say this verb, it governs the choice of the pronoun.

The real sentence with the verb is “She’s older than I am.”
(It’s bigger than we are. It’s smaller than he was.)

Can you ever end with the objective form in this type of sentence? Yes. It all depends on exactly what you mean.

For clarity in this type of situation, write the sentence out completely.

Objective pronouns are the object of a verb or a preposition.

Jon asked Liz and I / me to go with him/he and Sharon. First, remove Liz. You’re left with “Jon asked I” or “Jon asked me.”

Your second choice involves him / he. “Jon asked Liz to go with him.” Because “with” is a preposition, and because 99% of the time pronouns following prepositions will be objective case, you must use him.

Full sentence: Jon asked Liz and me to go with him and Sharon.

Reflexive pronouns must reflect back to the subject, referring to the same person. They’re used as a mirror image of the subject.

Jon asked Mary and myself / me to join him. There are two ways to decide which is correct. Either remove “Mary and,” and choose between “myself/me” alone, or ask yourself if “Jon” and “myself” are the same person. And they are not.

The correct sentence is “Jon asked Mary and me to join him.”

You can say “Jon cut himself while shaving.” (Jon and himself are the same person.)

Reflexive pronouns are also used as intensifiers — making a statement stronger and more certain by the repetition. For example:

I myself saw Joan fall down.

I hope this helps you in choosing pronouns correctly!

These pronouns DO NOT EXIST: hisself, themself, ourself, theirselves, theirself.