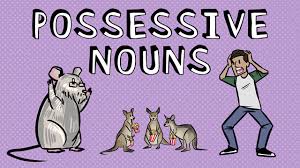 Have you ever had trouble forming possessives of nouns correctly? Can you identify what a possessive is … and is not?

A noun ending in s is usually in the possessive form if it is followed immediately by another noun. Older grammar references said only humans could possess (own) something, so possessives could be only about ownership.

Modern thinking says possessives express a number of different relationships, including but not necessarily limited to ownership.

To decide if a pair of words such as “tables legs” is even in possessive form, take the second word (legs) and put it in front of the first word (tables).

Then insert “of” or “of the”  between the words. Does it makes sense? Can “tables legs” be “legs of the tables”? Sure it can. So it’s a possessive phrase.

But. How do you know where the apostrophe goes in the first word (tables)? Here are the steps to forming possessives correctly.

First, decide if the word you are making possessive (the first word in the original pair) is singular or plural. It’s all about context, the context of YOUR writing.

Once you have determined that, there are only three rules to remember:

If the word is singular, add an apostrophe and the letter s.
IF “tables legs” means “legs of the table,” you would write “the table’s legs.”

Now, can these ever be written differently? Yes, according to modern usage, which says that a singular noun ending in s needs only the apostrophe.

So, it’s acceptable to write “the goddess’ eyes” if you’re writing about one goddess, or “Jesus’ parables” when writing about Jesus. But if you actually add an extra syllable, I vote for adding the extra s to account for it.

If the word is a regular plural, one that ends in s or es, add only an apostrophe. You already have the s built into the word.

IF “tables legs” really means “legs of the tables,” you would write “the tables’ legs.”

If the word is an irregular plural, one that does not end in s or es, add an apostrophe and s.

Examples include men, women, children, and people. These should be the easiest to spot, because without the apostrophe, the words mens, womens, childrens, and peoples don’t exist. They are already plural without the s; you can’t have plural plurals!

And because so many people are confused about working with possessives, it’s often better to stick with the original three rules as listed above. Because as we know, first impressions of our writing count!