In Oz, I learned about tall poppies, the outback, and vast open spaces. Do you know how huge Australia is? I sure didn’t! I found that out when I said I’d make a quick hop between Melbourne and Perth for a one-day project (think Florida to California, and you’re close). 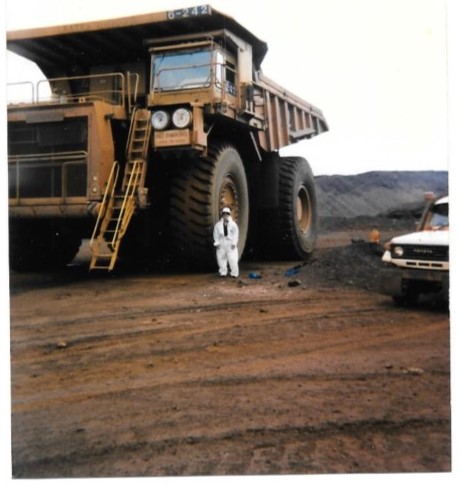 However, as it turned out, that part of my trip gave me the most intense memories: I ended up in a small town called Paraburdoo, northeast of Perth, where I rode in a monster earth mover and toured a strip mine while wearing a white coverall the locals called a “sperm suit.”

Uh huh. Quite a sense of humor those Ozzis have!

Why isn’t Australia closer to this coast?

Taught “Negotiation 101″ and “Creating Great Performance Appraisals” at the yearly Educational Conference of the International Association of Administrative Professionals. There were nearly 100 admins present for this spectacular day of learning and networking.

And how can anyone not love Bermuda? The houses are wonderfully colored (OK, coloured), the sky is blue, and the ocean is everywhere. A tiny group of islands measuring only 21 square miles captures everyone’s heart; many people return year after year for all that Bermuda has to offer.

I can’t wait for my turn!

What a marvelous place Hong Kong was! We flew in to the old Kai Tak airport, which meant we had to fly terribly close to tall buildings right in the heart of the city area. It honestly looked as though the wings of our plane would touch one of them; I know I held my breath and prayed. I think we all did.

Once we landed, an entire city and culture were spread before us. I had known very little about Hong Kong, but I had two days to recover from the flight, the time differences, and the startling culture differences, which I did for as long as I could keep my eyes open.

What a city! I took a ferry over to Kowloon, wandered the markets, watched the sun set — and saw, for the first time a large number of people walking around using cell phones. Remember the ones that were the size of bricks? I couldn’t believe it, and I never really expected to need one myself. My, how times and attitudes have changed.

It was a magical place and time, and I’m very grateful to have been able to see it.

This is a true sadness. I flew into Kuala Lumpur late in the day, so I couldn’t check out the venue for the training until the next morning.

It turned out that there had been a breakdown somewhere in the communica- tion between the company that sent me and the venue, so the venue was not expecting us and there were no materials to teach from. I had to inform the nearly 300 women expecting a full-day workshop of this situation, pack my stuff, and then fly to my next location, Singapore (see details below under Singapore).

I had no idea New Zealand was so perfect. You can see the entire country (east to west) while flying north or south — no point, so I was told, is more than 70 miles from an ocean. And the country comprises three islands, not two: North Island, South Island, and Stewart Island. Northland is a province in the North Island, not the name of the northern-most island.

Stewart Island, the third island, is meant to represent the canoe’s anchor.

Yes, there really were more sheep than people. Yes, the country’s unspoiled. Yes, it’s beautiful. Yes, Air New Zealand served a full breakfast on the flight between Christchurch and Wellington (a 30-minute flight, if that), including tea and coffee in old-fashioned-looking silver pots. No, I don’t know how they did it. Probably with mirrors. All I know is — it was just wonderful!

Oh, and don’t even get me started on the uniforms of the flight attendants! And the care they lavished on us. And the accent. I fell in love when they first said, “Ladies and Gentlemen, boys and girls.” I’d go anywhere on Air New Zealand — preferably, back to New Zealand!

This was my first opportunity to present in a foreign country, and it was a wonderful experience! Manila was gorgeous, and although I didn’t have too much time for sightseeing, I did manage to wander around the hotel area and begin to delight in the fact that I was not home. The audiences were enthusiastic, even though some of the ideas in the “Assertive Communication Skills for Women” workshop were a little different from what was done in their country at that time.

I wish I could have stayed longer.

I had heard that Singapore was clean, shiny, and marvelous. I had heard correctly. My only sadness came from being there for such a short time; I only had two days so I couldn’t explore the area nearly enough.

I ate boboti and ostrich, toured the Stellenbosch wine country outside Cape Town, took pictures of Table Mountain, and marveled at the sunsets. I was privileged to see the house where Nelson Mandela lived and the former prison where he had been incarcerated. Several warm and wonderful people gave luncheons for me and took me out to dinner. I saw the ocean, the mountains, and the deserts. I heard lions roar. I marveled at the different plants, notably protea! Amazing country. Amazing people. Amazing experience!

One fun experience I had was with a cab driver, who assured me I’d know when we were getting close to my hotel in Jo’burg because I would see the robot in the street. Um. Sure. Robot. (Remember, this was in the mid-1990s.)

The robot turned out to be what we call a traffic signal or traffic light here in the U.S., so he knew I’d be surprised … and I was!

I would go back in a heartbeat.