Today’s lesson is brought to you by the often-misused punctuation mark called the comma.

Many of us writers never learned the basic rules for commas, and as we’ve aged we’ve really struggled with them.

We’ve heard that if we pause when speaking, we should put a comma in that place. Does that sound familiar? Well, guess what?

That’s not an absolute rule. Anyone, could, pause, in, a, space, because, of, how, they, talk. And do you really think all those commas belong in that sentence? Neither do I.

And some writers just don’t want to have to learn “all those rules” again, but honestly — there are maybe a dozen critical ones in terms of clarity (including blogging), and I’m sharing three of them here.

Rule #1:  Use commas to separate three or more words, phrases, or clauses in a sentence.

Have you ever seen this picture before?

You’re laughing, right? But why?

It’s a great example of why commas count! With no commas, most of us read that Rachael Ray likes cooking her family and her dog, which is NOT what was meant! At a minimum, we would need one comma after cooking, and those of us who are passionate about the Oxford comma (serial comma / last comma in a series — see “Rule” #3) would add another one after family. 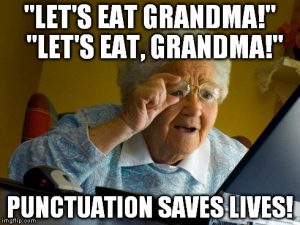 Rule #2: Use a comma in direct address.

This one, in all its variations, has gone viral on the Internet, which is a good thing. But since few of us write about our grandmas, we may not see what the rule actually is. “Direct address” means you are writing to a specific person (addressing that person directly), so you need a comma to set off that person’s name or title. It’s as simple as that.

Many times well-intentioned fellow bloggers will thank me for sharing their posts, with these words: “Thanks for sharing Susan!” Oops. No.

Those words literally mean that someone named Susan is being shared.

Silly? Yes. But if you can see how “Let’s eat, Grandma” is different from “Let’s eat Grandma” you see the importance of following that rule. We are judged by our readers in many ways, and one of those is how professionally we communicate.

And if you rewrite the sentence, you still need a comma (or two, if the name or title is in the middle of the sentence):

“Rule” #3: Use the Oxford comma (the last  in a series before “and” or “or”) to avoid unintended humor or misunderstandings.

So your parents are these two? Well, that’s what the sentence actually says.

As written, it appears the parents are Superman and Wonder Woman. And although many of us might consider our parents to be their equivalent, we wouldn’t mean it literally! The comma after Superman would clear things up very well.

Using the Oxford comma isn’t a hard-and-fast rule, but it’s a really good idea to save us all from embarrassment. If we as writers cannot communicate clearly, we will be seen as “less than.” We cannot depend on our readers to understand what we mean when we haven’t been clear.

And although many sentences would be just fine without the Oxford comma, I formed the habit of using it years ago every time I write items in a series. I have better things to do than wonder if THIS sentence or THAT sentence needs the Oxford comma or will be OK without it.