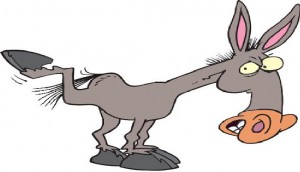 With apologies to those who are stricter grammarians than I am: Today we’re going to get rid of some stubborn-like-a-donkey old “rules” once and for all.

1.  Never use a preposition to end a sentence with.

This one’s been around for a long time, and it needs to be given the boot. It appears to come from early grammarians’ attempts to force English to follow the rules of Latin, which it doesn’t. This “rule” is unsupported by most modern grammarians, because blindly following it can lead to some very awkward sentences. The examples below show good grammar doesn’t always translate into good communication!

Since the point of most business-related writing is clarity, sometimes abandoning a rule that never really was a rule is the best idea.

2.  Remember to never split an infinitive.

The infinitive is verb form preceded by to – to eat, to read, to learn. Splitting the infinitive means putting a word in between to and the verb – to hungrily eat, to quickly read, to thoroughly learn.

This issue also comes from Latin where splitting the infinitive is impossible because infinitives in Latin are just one word. That type of infinitive is still found in other Romance languages whose root is Latin such as French and Spanish.

But English is different. Our infinitives are two words, so “splitting” them is possible. And sometimes the emphasis changes when we split an infinitive; if that’s true in one of your sentences, relax. If it sounds better, do it.

Do you recognize this one? To boldly go where no one has gone before. Sure you do. But how much energy would be lost by following the split infinitive “rule”?

Nope. They just don’t work! The rhythm changes, and it’s not as strong a statement.

3.  And don’t begin sentences with a conjunction.

Conjunctions are joining words, usually connecting words, phrases, and clauses. However, they can connect separate sentences. While strict grammarians might not agree, sometimes a long sentence that uses a coordinating conjunction (and, but, for, nor, or, so, yet) to connect the independent clauses sounds better when separated into two shorter sentences. Shorter sentences are usually easier to read and understand.
Beginning sentences with conjunctions is acceptable to most modern writers.

Isn’t American grammar fun? And if you’d like to learn four more old grammar rules that you can stop worrying about, click here.

Share on LinkedinShare on Twitter
begin sentence with and or but, conjunctions, end with a preposition, grammar myths, old grammar rules, split infinitive