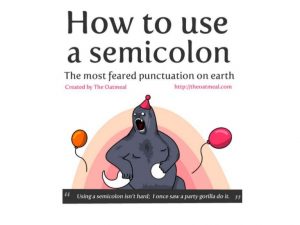 Do you wonder why I titled this article “Pity the Poor Semicolon?”

Have you noticed how many times semicolons get dragged into the wrong place in a sentence?

Too often, one is used instead of a comma or colon, either of which would be happy to take its place! Too many writers have no idea what to do with it, and I hope this post will help.

I teach a three-hour corporate workshop called “Brush Up on Your American Grammar Skills,” and I discuss the most-common uses of the major punctuation marks. The workshop is intended for business professionals, whose goal is usually to communicate a message clearly. And I believe in the KISS principle — my version of it anyway.

Here are the three — yes, only three — basic rules in the American grammar system for using a semicolon in business writing. If you are writing a thesis of some kind, you might find another rule or two, but first — let’s all master these three.

1. Compound Sentences: Use a semicolon to join two independent clauses (simple sentences) together. Each sentence could stand on its own (each has a subject and predicate and is a finished thought), but you choose to join them because they work better as a complete thought. Simply replace the period of the first sentence with a semicolon, as shown below, and you’re good to go!

Mary had a sandwich for lunch. John opted for a burger.
John’s running late. Susan will fill in for him until he arrives.

With the semicolon used correctly:

Mary had a sandwich for lunch; John opted for a burger.
John’s running late; Susan will fill in for him until he arrives.

You could also connect them by using a comma, and one of the seven coordinating conjunctions (and, but, for, nor, or, so, yet).

Mary had a sandwich for lunch, but John opted for a burger.
John’s running late, so Susan will fill in for him until he arrives.

NOTE: There is NO requirement to join the two independent sentences, but many writers realize that always writing short sentences makes them look as though they never left third grade, which is hardly the impression most writers want to make.

2.  Transitional Expressions: If you link independent clauses with terms such as for example, however, moreover, namely, nevertheless, or therefore, replace the period of the first sentence with a semicolon. Again, you may always choose to keep the sentences separate.

3. Items in a Complex Series: Items in a complex series contain required internal commas, so we use semicolons to separate the sections. Think of the semicolon as an “internal traffic cop”; it’s not an end mark of punctuation, but within a sentence of this type it indicates a section is finished.

In the example below, it’s especially difficult to figure out who is who when the occupations and names are written as shown! Which name goes with which occupation?

If you read all the way to the end, the sequence becomes clear: the name comes before the occupation in the sentence. That means that “President” has no name attached to it — in this sentence.

Using the semicolon after President is intended to show that the name following it does not belong to it. Will that work with every reader? Nope. Nothing works with everyone, but here we’re trying to make it easier to understand for most readers. Again, I like bullet points with lists like this, although without the President’s name, it’s still a terrible sentence.

Now, in the real world, we’d find out that President’s name, right? So, I’m just showing this sentence for illustrative purposes.

The last example again shows required commas (between the cities and the states) but the state name ends a specific section of the sentence, thus requiring a semicolon after it.

Here are a few common NO-NOs:

❌ John and Mary went to the show; but they arrived late. (Use a comma.)

❌ Although they tried to plan; they failed. (Use a comma.)

❌ I need just three things to finish; scissors, glue, and tape. (Use a colon.)

In the end, if we can remember that semicolons have a very restricted use, we might write clearer prose. And we’d make our grammar teachers very, very happy.