The real problem with swearing? No, it’s not what you might be thinking.

Recently, I posted a fun meme that had a “swear” jar and a “talking about my dog” jar for coins, reflecting an old idea that when we swear or when we talk about topics we weren’t asked about, we should drop a coin in the jar to remind ourselves to not do that.

Oh, you missed it? Well, here’s the link.

But to my point, the words we use aren’t the only issue, especially with swearing.

Because not everyone thinks the same way about specific words. Each language has some words that are considered naughty or inappropriate in polite society, but there may be disagreement in any one country/culture or even different countries that use much the same language.

In the U.S., the word “bloody” means covered in blood; it’s not a nasty, dirty swear word.

But in the UK, it has been one of the worst of the worst, even though apparently that may be changing.

Here in the U.S., the “F” word is about as ugly as we can get, although even that word seems to be creeping into more polite conversations.

So if it’s not the specific word that gets so many of us riled up, what is it?

The tone of voice we use along with the words.

Most of us know the approximate percentages of beliefs we have with words used by others in what’s known as a “mixed message,” one that just doesn’t “add up.” Absent true clarity, our belief in the message will come from the words we hear about 10% of the time, the tone of voice about 30% of the time, and the nonverbal/physical gestures 60% of the time.

So while the words matter, they may not be the most important part if they don’t align with the tone of voice; in that case, we’ll believe the tone is sending the real message.

Saying “Sure, that will be fun” with a harsh voice likely won’t fill a listener with good feelings; they’ll probably believe just the opposite. Even a little kid might not believe we mean it if our voice doesn’t sound “right.” 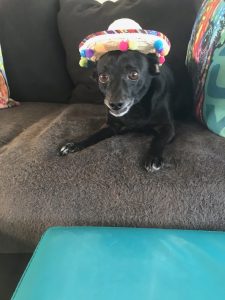 I finally realized that for myself, the more I repeat the word(s), the more upset I get. And when I swear, my tone of voice reflects the anger/upset in whatever situation is driving the need to swear.

It’s even worse for my dogs — especially my poor little rescue, Gibbs — who clearly has PTSD from his early years before coming to live with me. Gibbs runs to his crate and shakes when he hears those tones, which stops me immediately. He so doesn’t deserve that!

And who’s getting me all upset?

It’s taken me a while to realize that although a situation may be difficult, ultimately swearing doesn’t help at all. It blinds me to seeing solutions, to seeing if the situation is even all that difficult, to seeing how to turn it around.

I don’t like getting/being out of control at all, so now when I’m tempted to use a swear word, I (mostly) take a deep breath and make a conscious effort to relax.

I swear I’m working on this, friends. 😁

All in all, I think Gibbs would agree that our household is a far happier place when I do that.

What has your experience been with swear words, friends? Do they help? Hurt?