The three women who helped me become me will always be in my heart and memory. Without their efforts, I wouldn’t be who I am today.

Each of us probably has / had a few people in our life who stand out, people who really made a difference, people who helped shape us to become who we are. There are three women in my life who were critical to my being myself …

The first woman was my birth mother, the woman who conceived me, who gave birth to me (in secret, probably), and who gave me up so I could have a life she couldn’t give me. As I understand the story, she was already married and her husband was still out at sea as WWII came to an end. Was I a total secret from her entire family? Did anyone ever know she had gotten pregnant? Did she have the kind of support then we expect in today’s world (doubtful)? We’re talking about a long time back, when all this would have been truly shameful.

But she gave me life. She gave me half the genetic makeup I have that seems to be really good so far. She gave me up so another family could love and raise me, and I have to wonder how impossible that was for her to do.

The second woman, my adoptive mother, had the opposite issue: She had trouble conceiving, and she and my dad decided to adopt, again at a time when this wasn’t much talked about. And they did something special and quite remarkable: They told me from the beginning that I had been wanted, chosen, and cherished. And adopted. I never had to deal with that fact as a surprise as so many others have.

My mother tried hard to give me the life she would have wanted, but sad to say, she got a little girl who was as opposite as could be from her in every way. I was a true rebel, a brat, a Lone Ranger. I was not girly in the least. I was bossy. (NO. Those were NOT leadership skills I was exhibiting back then.) I was hard-headed and not very popular. I did not play well with others. I hated pink. I hated frilly things. I was (still am) a true introvert, content to sit and read for hours, thrust into a world that never seemed to quite fit, even though my mother tried so hard.

I acted out early and often, trying to win her approval for who I was, but it was tough. She was damaged herself (as were her older siblings) from a lonely, lost kind of childhood. Her own mother died when my mother was just 7, and she and her younger brother never got over that immense loss. Each became obsessed with never having enough — of needing everyone around them to praise, love, adore them. Their worlds largely revolved around their own wants and needs; empathy and/or sympathy for others was rare.

But I still give her a lot of credit for doing as well as she did with no strong maternal background to guide her. From her perspective, my wants and needs were pretty odd. Remember, this was back in the 1950s, when girls were girls and boys were boys. There were rules for all this, and I broke or tried to break most of them. There was nothing easy about being my mother. 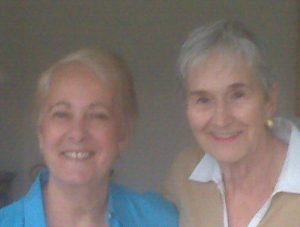 The third woman is the one whom I flat-out adored — the one who “got” me from the get-go — my mother’s baby sister, my beloved Aunt Kit.

She and my Uncle Bernie had three boys, and she had always hoped for a girl. I became that girl. She loved me unconditionally as did my mother, but even better, she understood me. And she didn’t have to try to change me; I wasn’t her daughter. It was really easier for her to just let me be who I was — even though I was going against many of the norms of the times — and just have fun with me. She was a much healthier version of her siblings; she never even knew her mother, who died about a year after giving birth to her, so there was never that gut-wrenching loss to deal with.

I cherished time spent with her — I still do — and I am grateful to her for that unwavering love that didn’t come with any “buts,” the love that still exists today, even though, on June 21, 2018, she died.

Until a couple of weeks before that, when she fell and broke her hip, we had talked every couple of weeks all my adult life. It is impossible right now to realize we won’t talk again, except in my heart and mind. She was only 94, and I, along with everyone who knew her, hoped she would live many more years.

It breaks my heart. She was always one of my biggest supporters and so much of my “sanity” is due to her being such a rock for me to hold on to.

Three women. Each special. Each exhibiting love, although in different ways. Each crucial in my development as a woman who would go on to have daughters of her own.

Oh, the top picture? Those are the china horses that I remember Aunt Kit buying for me when I was about nine and horse-crazy as so many little girls were and are. They are among my most treasured possessions, having moved with me so many times, always swaddled in towels and on the top of any box they were in.

I am grateful every day for having been given life, love, and understanding.