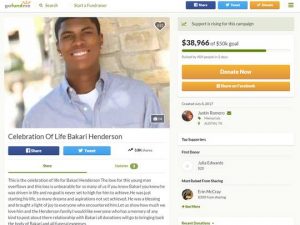 I am sitting at my computer, watching the news, and again, I’m struck with horror at the killing of an American student named Bakari Henderson in Greece by an angry mob a few days ago.

It appears that the student and his friends, who were on vacation, were sitting in a bar, talking, laughing, and drinking. “The fight may have started after Henderson and his friends wanted to take a photo with a waitress, which angered a bouncer,” according to CBS News. Several others came over and got in the student’s face. He ran outside, and eight or nine others followed him. The video is horrible to see.

He died at the scene. Beaten to death.

Six Serbian tourists and two workers at the bar have been arrested. An attorney for one or more of them said on tonight’s ABC news, “They never intended to kill anyone.”

My question to those now accused of murder and others who use the “I didn’t mean to” defense is simple:If you didn’t mean to do what you did — WHAT DID YOU MEAN TO DO?

What were your intentions? What was your plan? What did you think would happen when you ran into the street with all those others, all of whom — including you — kicking this young man in the head, this young man lying on the ground defenseless.

And his crime seems to have been trying to take a selfie picture, or possibly it had something to do with drinks put on the wrong table. How do either of those actions translate into a mob murder?

And their defense is that they didn’t mean to kill him?

What the hell did they mean to do, then?

Those are a coward’s words after the fact, as though they’ll prove innocence.

Those are words from those who know damn well they DID do harm of some kind.

Those are the words of a weasel, someone who takes no responsibility for his or her actions.

Those are the words of those who have little if any moral sense.

No regard for others.

So on top of losing their beloved son, who from all accounts was a terrific young man, his family has to wonder what kind of animals killed him.

How do we stop this senseless violence? How do we change the way we deal with others, even those we don’t like? How do we help our children grow up to be responsible adults who, when they goof, admit it and learn from it?

How do we teach them that all actions have consequences?

Talk to me, friends. Talk to me.