Would you like to know how you can visually smooth out your writing?

As a copyeditor, I work on a wide variety of articles every week, some so well written my jaw drops in awe.

Occasionally there’s one that needs a little more work.

But sometimes it’s the way the article looks — the physical layout and setup. It’s the first impression that we all get, and if it looks like an 8-year-old wrote it …

Luckily there are a few things that can help almost anyone have their writing look like something that’s worth reading. And they’re all mechanical, so they’re easy for most of us to implement.

Be consistent with your sentence spacing. The standard, which has been mostly accepted over the last 20+ years, is one space between sentences, meaning after every end mark of punctuation, not just after a period. A lot of writers still use two spaces, and I did for a long time before I finally gave in. But here’s the thing: It’s either one or two spaces between them, never three or four or five.

Use one period at the end of a sentence (or three if you’re using the ellipsis mark), not two or four or five.

Be careful about breaking words into syllables at the end of a line. Too many hyphens trailing down the right side looks awful, especially if you’re only leaving two or three letters before the hyphen. In those cases, put the whole word on the next line.

Limit your use of italics, which look fussy when there’s too much. Italics are fine under a picture or as a way to highlight a word, especially on social media platforms that may not have many formatting options. But please exercise restraint.

Break your paragraphs! Huge blocks of text — more than about 8 or 9 lines — are very hard to read; they look intimidating and it’s too easy to get lost in the middle of them.

To make the paragraphs reader-friendly, put one blank line between them. It makes each paragraph stand out, and it gives your readers a moment to rest.

Now, if you indent your paragraphs — which you don’t have to do! — you can get away with not putting a blank line between them. But without that blank line, I  think it still looks text-heavy and not terribly welcoming. Your choice, but do think about it.

Your readers will thank you. 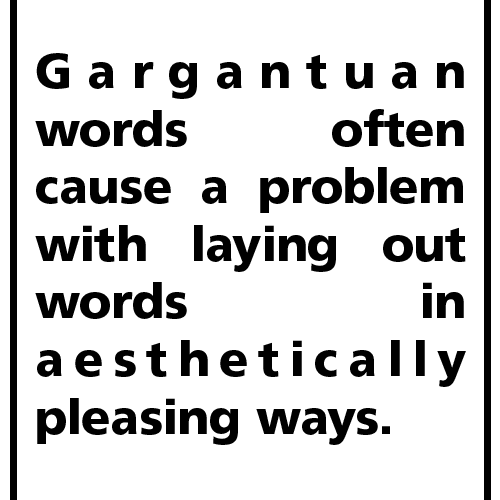 Justifying it means the spacing between words may not be the same line to line; all the words have to fit within a prescribed area, and sometimes — in the worst cases — there may be just one or two words on the line with huge spaces between them, as in the picture you see on the right side here.

This is another example of “just because you can doesn’t mean you should.”

And surprisingly, right-justified text is very hard for those who are dyslexic, due to what is called a “river effect,” that of flowing water through the text.

All of these measures mean your readers will see you as the professional you are, even before reading your words and understanding your ideas. We often judge others and/or their efforts by how they look, fair or not; let’s be sure our documents always help us look and sound as smart as we are.

5 thoughts on “Visually Smooth Out Your Writing”