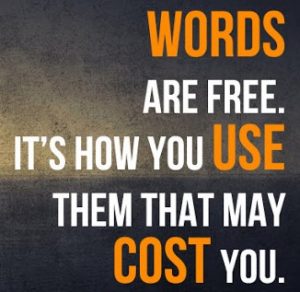 They say that words have power, and I so agree with that!

I’ve written many articles on communication, largely because I’m so often surprised at how we think we’ve communicated … but haven’t. About how often we said “A,” and the other person heard “B.”

Many of us know the famous percentages of belief, especially when the message given doesn’t seem to add up, doesn’t seem quite right, when it’s what’s called a “mixed message”:

In a mixed message, words account for roughly 10% of our belief at that time, tone of voice for about 35%, and nonverbal actions for about 55%.

I realized recently that this applies almost exclusively to humans! I was sitting with my two dogs, Duke (in front) and Gibbs, and was using loving words and tone of voice as I talked to them. “Who’s the best puppy?” “Are you a beautiful pup?” You ARE a beautiful pup!” 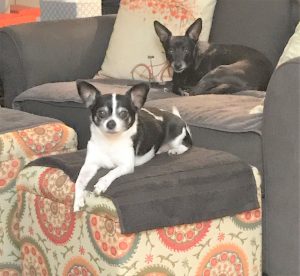 But here’s the point that first occurred to me: It honestly doesn’t matter what words I use; they don’t know much about language (except crate, sit, supper, walk — and a few others). I could call them stupid, ugly, or any other negative word, but as long as my voice is loving and my actions match the tone, they’re content.

Then for some reason, my mind went to the reality of our words with other humans, with our thoughts and feelings about them when we categorize and label them, when we use harsh words to see them as less than a full human.

I know that if I think someone else is stupid, I’ll start seeing that person just that way. I’ll narrow my focus. I’ll see every action through that lens. Even if there’s evidence that they’re not … my mind might also say, “Yeah, well. They got THAT right. But they’re still stupid.”

I remember being on a BOD at my previous condo, and the condo manager always talking down about a couple of homeowners. And as she labeled them, I could see one or two others nodding. The hardest part? We as a BOD didn’t take their complaints seriously, because we had judged and labeled them as “PITAs” or far worse. We dismissed them due to our blinders on how we perceived them. I only spent four months on that BOD; I couldn’t deal with the ugliness.

Words do have a lot of power, often more than we realize as we’re using it. And as humans, we have the power to make choices, to reflect on what we’re saying, thinking, writing … all to ensure we’re acting as our best selves.

What are your thoughts here? Have you ever assigned a negative label to someone and regretted it?