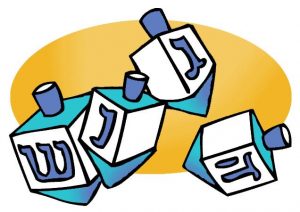 As I was researching some sites for fun stuff for Christmas and Hanukkah (also spelled Chanukah), I saw a list of Yiddish words and just had to use it.

This is a list — I doubt it’s an exhaustive list — of commonly used Yiddish terms and phrases. I grew up hearing a lot of these in my grandfather’s house up in Maine. There was more Yiddish spoken there than in my own house, although my mom did use a few of these phrases.

I’m just picking out a few here that I am familiar with; if you grew up hearing any of these or the others on the original list (link at bottom), feel free to weigh in!

And even if you’re not Jewish or didn’t grow up with many Jewish friends, you probably have heard several of them; they’re part of the English language now in many areas. But you might not have known what they meant . . . or that they had their roots in German / Yiddish.

ALTER COCKER: An old and complaining person, an old fart

BOYCHICK: An affectionate term for a young boy

BUBBALA: A term of endearment, darling

BUPKES: Something worthless or absurd; nothing (I got bupkes.)

CHUTZPAH: Nerve; gall, as in a person who kills her parents and asks for mercy because she is an orphan

DRECK: Shit. Can refer to the ugliness of objects or people

KIBITZ: To offer comments which are often unwanted during a game, to tease or joke around. A kibitzer gives unasked for advice

KVETCH: To annoy or to be an annoying person, to complain

LOCH IN KOP: Literally a hole in the head; refers to things one definitely does not need

MAVEN: An expert, a connoisseur

MAZEL TOV: Good luck, usually said as a statement of support or congratulations

MENSCH: A person of character. An individual of recognized worth because of noble values or actions

NOODGE: To bother, to push; a person who bothers you

NU: Has many meanings including, So?; How are things?; How about it?; What can one do?; I dare you!

SHLEMIEL: A dummy; someone who is taken advantage of; a born loser

SHMATTA: A rag, often used as a putdown for clothes of the unfashionably dressed

SHMEER: To spread as in to “shmeer” butter on bread or cream cheese on a bagel. Can also mean to bribe and can refer to the “whole package,” as in “I’ll accept the whole shmeer.”

SHVITZ: To sweat, also refers to a Turkish bath house. A shvitzer means a braggart, a showoff

YENTA: A busybody, usually refers to an older woman

If for some reason the above words weren’t enough . . . here’s the link to the entire list.

So, while this is likely more than you ever wanted to know about Yiddish, at least it’s window into a world that is fast disappearing.

Oh, the picture is of dreidels, small spinning tops that are often played with at Hanukkah, which starts December 24, 2016 (the same night as Christmas Eve this year!): The dreidel is a Jewish variant on the teetotum, a gambling toy found in many European cultures. Each side of the dreidel bears a letter of the Hebrew alphabet: נ (Nun), ג (Gimel), ה (He), ש (Shin), which together form the acronym for “נס גדול היה שם” (Nes Gadol Hayah Sham – “a great miracle happened there“).