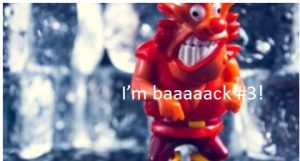 There are a number of devilish details that hurt LI profiles!

There have been hundreds – if not thousands – of articles written in the last few years on how to create a powerful and professional LinkedIn (or other platform) profile. Most cover the same information, which has value because each of us is in a different place and time, and we have constantly expanding networks. We might not see Writer A’s post, but we might see Writer Q’s post.

But with all the posts I’ve seen, I haven’t noticed these three small points being mentioned, and they can make a difference to potential connections.

1. We all know that the experience section of a profile is like a résumé, with current and past job skills and positions mentioned, although much less formal. But too many authors haven’t changed any of the verbs about what they did previously to past tense. If you left a job, everything you wrote that you were doing then needs to be changed to the past tense, right? You need to change “I direct” to “I directed” and so on.

2. Along those lines, what I saw this morning in a top executive’s profile was a common error: misusing the word “lead.” In the present tense, when using this word as a verb, it’s pronounced “leed.” However, it can also be pronounced “led,” but that’s when you’re writing the heavy, soft, flexible metal.

However, if you’re talking about the past tense of to lead, the spelling changes to led. Not fair, but true.

Currently, you may lead others. But in the past, you led others.

And it can be hard to remember this one because the verb “to read,” which is also pronounced as “reed” in the present tense, keeps the same spelling in the past tense but is then pronounced “red.”

Even worse, there’s a perfectly good word “red,” the name of a color, which sounds like the past tense of “to read.”

3. Do you have a Ph.D.? An M.B.A.? Any other abbreviated designations that you put periods in?

If you do, please remember that the last letter needs to have a period after it, not just first two or three. Writing “Ph.D” or “M.B.A” will be seen by many as careless, and I’m pretty sure that’s not what most of us want others to think we are. By the way, I’ve also seen this in other places, recently on a connection’s email signature.

To eliminate this issue, you might want to write those designations without any periods, a style that many favor.

Yes, I’m a detail-oriented person when it comes to my work, which means I see typos everywhere (yes, once in a while even in my own stuff). This is what copyeditors do on a daily basis – check to make sure that what writers think they have written actually is what they have written.