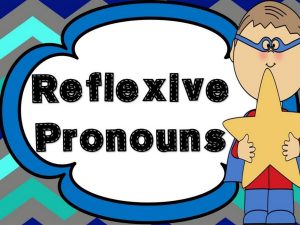 Using the “self” pronouns correctly can be tough! Those are the ones that end in “self” or “selves.”

Many speakers and writers use them everywhere, but these pronouns have a very limited grammatical purpose: They’re meant to be mirror image of the subject of the sentence or clause they’re in. And that’s it. Nothing else.

Sara Rosinsky posted an excellent reminder this morning about using I and  myself; I’m going to expand on it just a little.

Self pronouns may only be used when they refer back to a previously mentioned noun, the subject of a sentence or clause, who MUST be the same person. It’s like looking in a mirror: The pronoun has to reflect the image of the original subject.

These pronouns are called reflexive pronouns, when used this way;  they’re also called intensive or emphatic pronouns with a slightly different usage (see examples way down below), but they still follow the basic rule.

Used as a reflexive pronoun:

YES: I sang to myself while I was cooking. (I and myself are the same person.)

NO: John sang to myself while we were cooking. (John and myself are NOT the same person.)

YES: John sang to me while we were cooking.

YES: John sang to himself while we were cooking. (John and himself are the same person.)

YES: As I was cooking dinner, John quietly sang to himself.

YES: As I was cooking dinner, John quietly sang to him (another male).

Used as an intensive (emphatic) pronoun:

YES: I myself heard John say that! (Again, I and myself are the same person.)

YES: Sara herself created that post this morning on using I and myself.

Oh, and the self pronoun can never, never, EVER be the first word or the subject in a sentence.

NO: Myself and John …

NO: John and myself …

I sure hope this helps!

Share on FacebookShare on TwitterShare on Linkedin
American English, English, herself, himself, myself, pronouns, self pronouns